From my protest at what I had seen... Two young girls defy ancient patriarchal traditions in Georgia's stunning film entry for the Oscars. 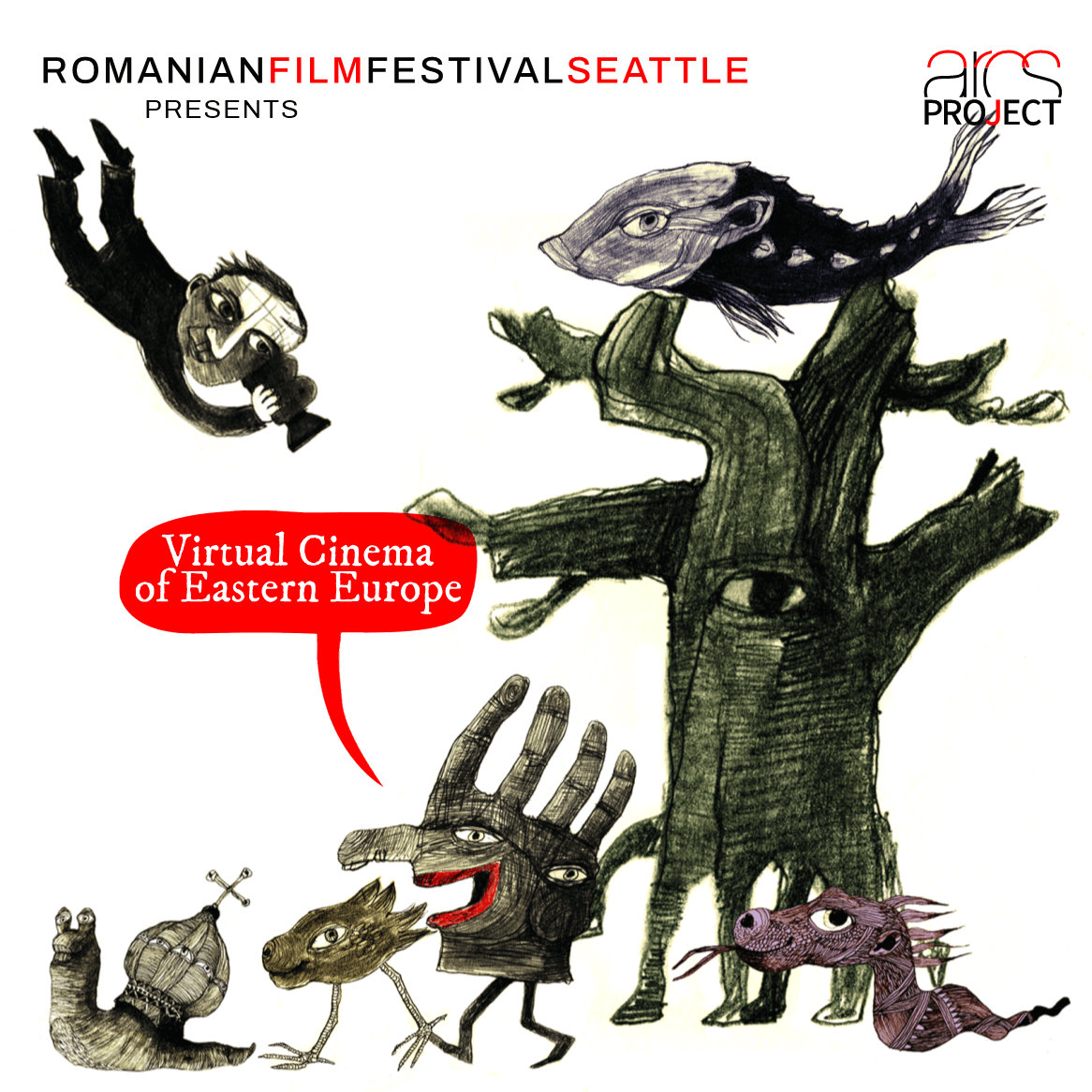 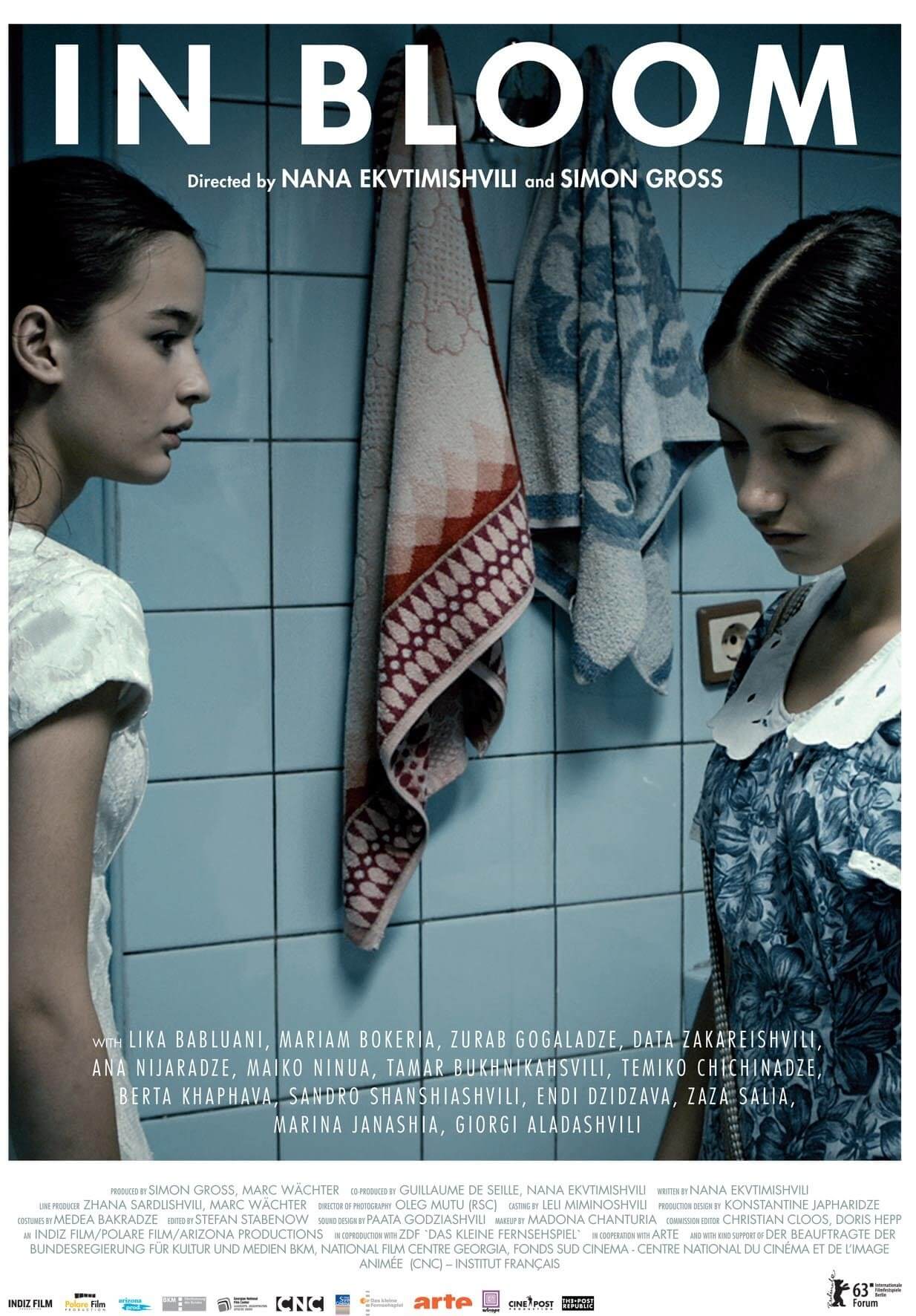 "There were many things I had problems accepting during my childhood and teenage years. One of them was the institution of forced marriage (bride-napping). No matter how much a guy loves a girl, there is no excuse for this, not even the fact that it is tradition." - Nana Ekvtimishvili, c0-director
Click To Tweet

72 hours access window. If you close your streaming window check your emailed receipt from us. You can always email us guest@filmabee.com. We use the secure payment systems Stripe & PayPal. For Apple Pay go here.

“When it comes to discovering new talent in Europe, Georgia is the new Romania."

Even in their least dramatic scenes, Babluani and Bokeria share a natural chemistry and magnetic on-screen presence. The languid camera work of veteran Romanian New Wave cinematographer Oleg Mutu also merits a mention... An eye-pleasing aesthetic for a classy and absorbing debut.”

"A hugely distinctive and individual piece... In Bloom is a deeply satisfying exercise with a strong female angle.”

“At some point a person decides whether his childhood was good or not, or how it was in general. Ultimately we are the writers of our own story, separate from the circumstances and the people who influenced our lives.” – Nana Ekvtimishvili, co-director
Click To Tweet 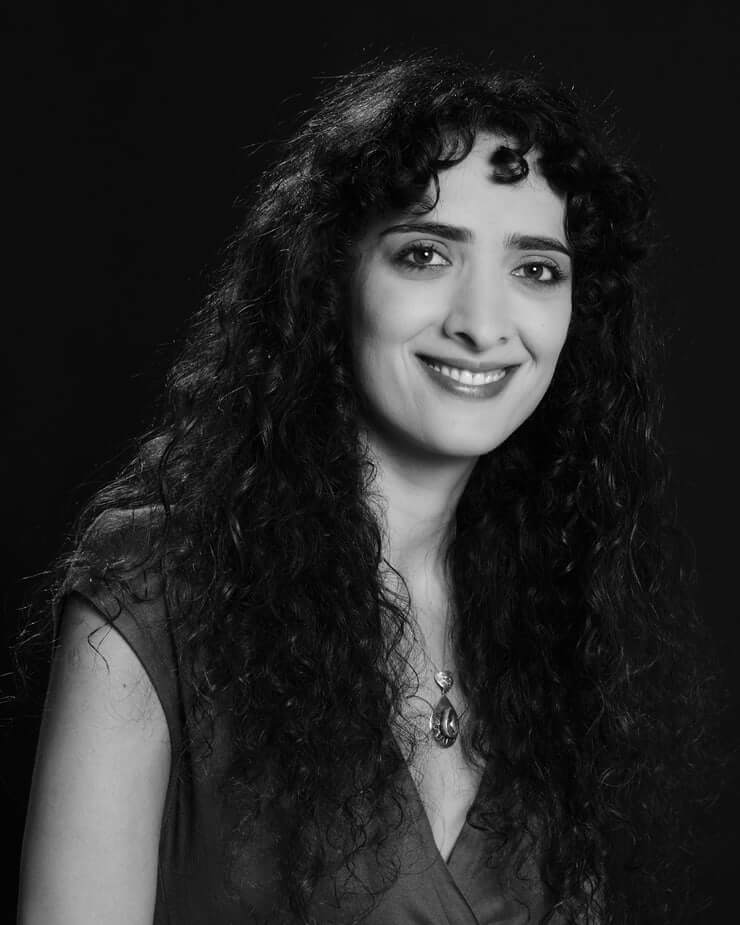 Interview excerpt by Cinema Without Borders with Nana Ekvtimishvili.

Borders: How did you come up with the idea of making IN BLOOM?
‍
Nana Ekvtimishvili: I was thinking about my childhood. I had a pretty good childhood, I think. Some people, especially in Western countries, might think that I had a terrible childhood because of the things that happened and the things I witnessed... but at some point a person decides whether his childhood was good or not, or how it was in general. Ultimately we are the writers of our own story, separate from the circumstances and the people who influenced our lives.

There were many things I had problems accepting during my childhood and teenage years. One of them was the institution of forced marriage (bride-napping). No matter how much a guy loves a girl, there is no excuse for this, not even the fact that it is tradition. Many girls would allow themselves to be fascinated with this kind of declaration of love and say "yes" to the marriage. When this happened, I would ask myself, "Where is the girl's family and society"? The girl's family members would go to the wedding and applaud. Even though things have changed in Georgia, I don't want to forget what was happening 20 years ago, I don't want to forget what kind of society it was that I grew up in.

The idea for IN BLOOM came from my protest at what I had seen at that time, when I was a teenage girl. I wanted to explore why one teenage girl would take some decisions while another would take different ones. Was this because of family, life experience, hormonal or sexual changes, intelligence, or was it just a matter of character? I was thinking about all this while I was writing the script. But before this kind of analytical thinking, first of all, some scenes from the film came to my mind... I would see these scenes and then think “why” and “how”?

‍CWB: How challenging was making this film?
‍
NE: Yes, it was very challenging to do this film. It was very personal for me, about a difficult time in my country and in my life. It required that I recall old memories, rebuild settings, find the original locations (everything was shot in its original location). And we worked with non-professional actors and children. It was hard to find money in the country, where the film industry had not functioned properly for the past 20 years, and hard to find money in other countries. But we were two, my husband, Simon Gross, and me. We have different origins, Simon is from Berlin, I am from Georgia, and I think our four eyes and four hands made the film what it is. We are both very happy that we had a great crew, great people around great actors and us who made the film possible.

CWB: Please tell us about your casting process for IN BLOOM.
‍
NE: We had a very long casting process. We looked mostly for non-professional actors and looked for them everywhere. We visited more than 100 schools... We have a lot of characters in the film - 24 kids in the classroom, children elsewhere in the school, people in the breadline and in the wedding... so the casting was the most exhausting part of the preparation period. Looking for two 14-year-old girls wasn’t easy. In this age they are changing very fast... and you have to find the right girl in terms of appearance but also in terms of her inner state, you have to catch the moment between her childhood and the moment when she starts to become a woman. We found Lika (EKA) in a school in Tbilisi.

Mariam (NATIA) we saw walking in the street. We introduced Lika and Mari to each other after casting was over. It was great. These two girls are very different and they felt this the first time they met. They liked each other and they were fascinated by each other. They liked their differences, and they were interested in this... They had respect for the things which they didn’t know about each other yet. And they were able to love each other – that was the most important thing!

‍CWB: Did you do a lot of rehearsals or did you just work with actors and crew on the set?
‍
NE: Yes we did a lot of rehearsals. The two leads didn’t have the script. But they knew every sentence their characters were to say and we went over this beforehand. Through their text and the words of their characters, they bound the script together. We let them do rehearsals from different parts from the script, from the middle, then maybe from the beginning and then maybe from the end and then from somewhere else again. So, there was no continuity... All the time they were somehow in the middle of the story and the two girls suddenly started to create their own characters by themselves. Through the scenes, through the words they were saying to each other... Some things were confusing for them, some things made them angry, and some things seemed to make them happy. They liked it very much.

I remember them coming to us and asking excitedly, “so what will happen to me next” and “how will my character react to this.” When they discovered that the character was sometimes close to their real character, they were happy! So the scene where they skipped class was one of the moments which they loved during the rehearsals. They learned the similarities and differences between them and their characters and accepted them. The difference between professional and non-professional actors was that we gave the script to professionals and they came to us having already learnt the text for rehearsals. Otherwise, the working process was more or less the same. We worked extensively with our cameraman Oleg Mutu, set designer and costume designer before shooting. We prepared everything beforehand and we had conversations about the idea of the movie and about the approach to the film generally.

We of course had seen all our locations beforehand and we showed them to Oleg, our cameraman. We visited archives with our costume designer and set designer, we watched TV footage of ordinary people on the street in Georgia in the 1990s... The rehearsal between actors and the camera is very important. It's important for them to get a feel foreach other because Oleg’s camera doesn’t try to describe things, Oleg’s camera feels things. And you need to find the right choreography for this. And to catch this in just one shot is almost impossible, but Oleg did this. So however the characters feel and however they move within the space, it’s possible to find the right way to follow them with the camera and that was our approach...

‍CWB: How did you come up with the visual style of your film?
‍
NE: From the beginning of the idea the story was set in spring time. I didn’t want to set the film in the time, what people usually think about Georgia in the 1990s: winter, dark and cold. I remember all the bad things from this time, but still I also remember the friends, the fun we had and the sunny days. And we wanted to follow the characters. We didn’t want to describe the story. We wanted the audience to follow the characters. When we saw Oleg's previous work, we knew already that this was a cameraman who absolutely feels characters and was able to come close to them in very authentic, very intuitive way. In the previous films he did - by very different directors, Mungiu and Loznitsa - Oleg applied a different camera approach. Oleg is not one to copy himself. So what Oleg’s camera is doing, is that he is somehow in chemistry with acting, with space, with the story. So that’s why we worked together.

When we talked about the script, we followed the idea of choreography, and not of the conventional style of storytelling, where the scenes are cut and where everything is covered from different points of view. The approach to the visual style of this movie comes through this idea: finding the right point of view for each scene. We developed the choreography of each scene, and we decided to cut the scenes where it seems to be really necessary. Because the cut is also a part of the storytelling process and not just a technical matter. With this approach you can't apply a single formula, because every scene is different, the characters have different emotions and each scene is a new challenge for everybody onset.

So, improvising on set with the crew, especially with actors and with the cameraman, was a main part of the work. And you can see, even when most of the scenes are done in just one shot, most of the people don’t realize really that it happens in just one shot...because they forget about everything and follow the characters... 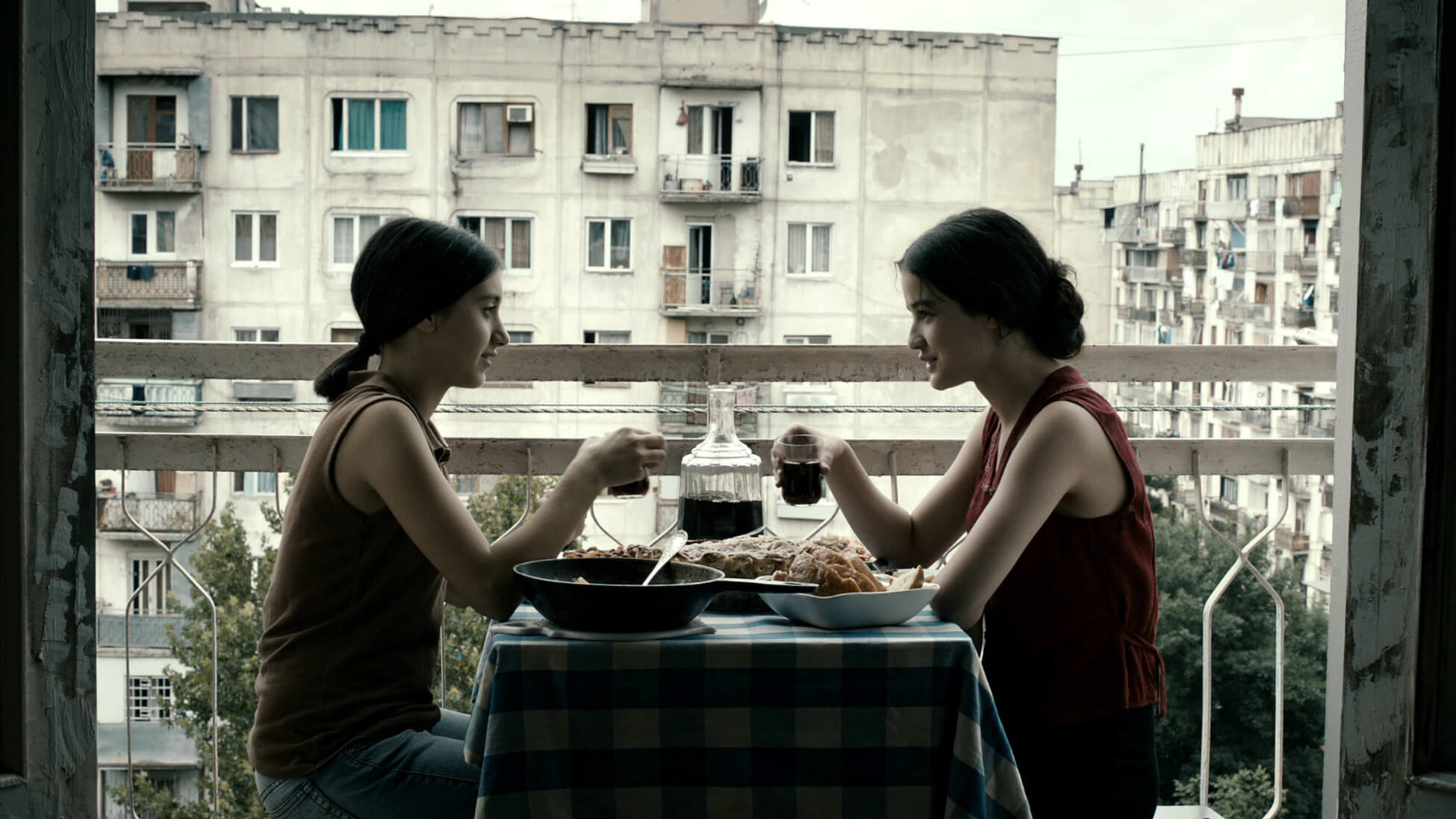 "When we talked about the script, we followed the idea of choreography, and not of the conventional style of storytelling, where the scenes are cut and where everything is covered from different points of view."
- Nana Ekvtimishvili, film director
Click To Tweet